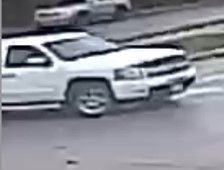 On November 2nd, 2019 the SSPS Criminal Investigations and Drug Unit (CID) commenced an investigation concerning a suspicious automobile and driver.

At approximately 3pm on November 2nd the male driver asked two young girls to get into a white pick up truck.  Both girls refused to comply, however the truck continued to drive by them.

The initial press release on November 3rd described the vehicle as a newer white Ford F150 with an extended cab.  CID detectives have uncovered surveillance video of the suspect vehicle and now believe it to possibly be a 2008-2013 white Chevrolet Silverado with an extended cab, running boards, white trim, rear tinted windows and a loud exhaust.

If you have any information concerning this vehicle and driver, please call the Saugeen Shores Police at 519-832-9200.  You may report information anonymously to CrimeStoppers at 1-800-222-TIPS (8477)